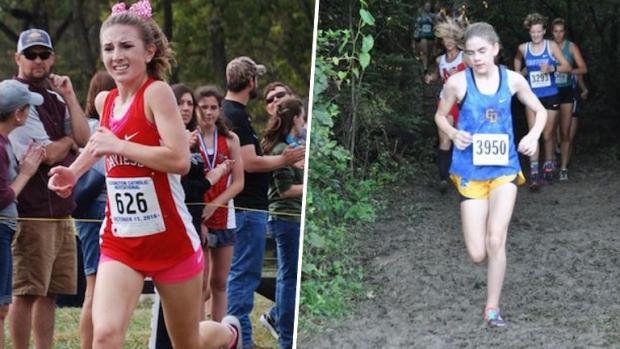 With each new season comes a new group of athletes that are indoctrinated into cross country programs across the state. This season has a unique feel to the leaderboard so far as only five of the top 20 times so far have come from seniors. Add to that total with only two from juniors and you get an impressive 13 of the top 20 marks coming from underclass(wo)men. So how did each meet fare in providing names to the leaderboard and which teams came out to make a statement? Let's break down each of the big meets from the past week.

Swags Fern Creek Relays led off the first week of cross country for a number of teams. A couple big time players in the class AAA team race went head to head in the alternative format of teams of two alternating running one mile legs. duPont Manual put the top team on the course with freshman Nicole Farnsley (freshman) and sophomore Abigail Bohn (sophomore). These ladies blistered the course and bested the Oldham County duo of Katy Chapman and Anna Constant by 24 seconds. However, it was Oldham County that put three pairs in the top four. Savannah Cagle (sophomore) and Hannah Henage (junior) placed third while Jacquelyn Ellsworth (freshman) and Ella Henage (freshman) come in fourth. Manual had their own pairs that did well in fifth and sixth place as Taylor Boggess (junior) and Mia Treinen(freshman) as well as Esther Biro (freshman) and Kati Hoerig (junior) represented them in these places. These two teams as well as Daviess County will be fighting atop the class AAA podium all season long!

Some footage from the 2018 Swags Fern Creek Relays. Yes, we employed an Oldham County parent to video, so there is some cheering. We don't blame him!
The story of the season so far has been the breakout of the Daviess County ladies. After a third place finish at the state meet last season and a runner up finish in 2016, these ladies have come into 2018 ready to get back to their 2015 championship ways. They started that quest at the KY/IN Border Challenge. Daviess County placed all 5 of their scorers in the top 13 led by senior Karlee Hoffman's 19:09. Coach Fortney has a deep squad of runners with plenty of youth. Two of the top 7 on their team right now are seniors (Hoffman and their #4 Kate-Bradley Rhoads) while the other five are made up of three sophomores and two freshman. This is a team that is built for years of success. We will talk more about the ladies of Daviess County later when we get to the Tiger Run.
I personally got a front row seat to a new meet for me at the Bourbon County Colonel Charge. The course was AWESOME! The meet management was impeccable. The competition was great for an early season meet. Bottom line here, if you ever have the first weekend of the season open, head out to Paris and join the Bourbon County Colonel Charge. The course is a winding, hilly path that never crosses so your athletes get a rare chance to see 5K of new scenery as they run to the finish line. This course is not a place to get that PR like some others that we have early in the season, however it is a quintessential cross country course.
Then came the races and the girls varsity race did not disappoint. As we sat in the timing tent and watched the girls come in from the three mile mark, we were all trying to figure out which team was in the lead. Mason County placed the top runner in Paige Decker (8th grade) but was closely followed by the first Bourbon County girl as Ximena Tamariz (sophomore) come in second. Then we got two Cooper runners with Macey Ruth (freshman) and Megan Kelter (senior). It seemed like with each runner that crossed, another one from the competing team was right there with them. However it was the pack of Mason County in 9-10-11 place that made the difference for the Royals as they took the team title over Cooper and Bourbon County (50-58-62). Add in the JV runners that would have placed in the top 5 for a couple teams and the scores get even closer. 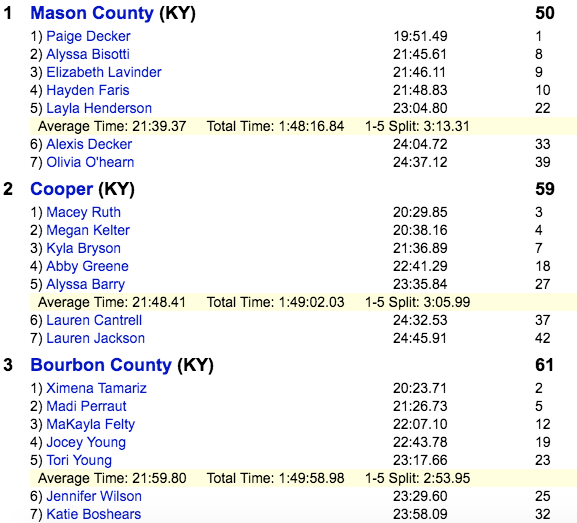 The Warren East Raider Twilight made me look like a psychic as the top two runners were athletes highlighted in the article "10 Athletes You May Not Have Heard of But Could Impact XC". Hailey Stallings (senior) of Grayson County and Maggie Aydt (sophomore) of McCracken County took the top two spots in 20:05 and 20:16 respectively. Aydt's second place finish anchored McCracken County's team championship as they placed all five scorers in the top 17. They have also solidified themselves as a top 5 class AAA team with their performances this week.

The fastest time of the week came from the Boyd County Early Season Showcase and came from one of the top class AA runners returning this season. Rebekah Howard (junior) of Ashland Blazer was the first of the 1-2-3 punch for the Ashland Blazer ladies as Mary Alice Thornburg (senior) and Aubree Hay (8th grade) took second and third respectively. The team competition was no contest as Blazer scored 32 points to Boyd County's runner up score of 64. All three of Ashland Blazer's runners broke 20 minutes and are ranked in the top 8 in the state for all classes.

Phoebe McCowan (sophomore) picked up right where she left off in the track season by running the third best time in the state so far and she did completely by herself winning the Pulaski County Invitational by 55 seconds. The Pulaski County Maroons took the team title by 13 points over McCowan's South Laurel team. Pulaski was led by sophomore Lauren Smith (sophomore). The returning class A state champion, Selena Mattingly (senior), placed third.

Lauren Smith won the 2016 Henry Clay/Tanner Duke Invitational as an 8th grader.
The closest team race came at the Madisonville Classic as Madisonville-North Hopkins and Marshall County were only separated by one point in the team standings. They took completely separate approaches as Madisonville-North Hopkins placed 1-2 with Joy Alexander (8th grade) and Abby Harris (sophomore) but had a 6:05 gap between first and fifth runners. Meanwhile, Marshall County placed 4-5-8-15-16 and had a split of 3:06. It was the frontrunning Madisonville-Noth Hopkins that took the team title.
The Trimble County Backwoods Invitational was a battle of two class A teams in an early season match up. Walton Verona and Bishop Brossart figure to be two of the teams that will vie for the state championship and this round went to Walton Verona. Ashley Akins (junior) and Caileigh Waters (sophomore) placed second and third respectively as Lexington Christian's Anna Rupp (freshman) took the individual title in 21:25. Bishop Brossart was a much tighter pack in 7-10-11-19-21 but it was Walton Verona's early low scorers that pushed them over the top to win 53-68.

Calloway County took both the girl's and boy's team titles at the Fulton County Invitational. For the girls they were led by 8th grader Drake Calhoon and sophomore Ainsley Smith. Paducah Tilghman placed 3 runners in the top five but did not have five runners to qualify a team score. St. Mary came in second as a team with 44 points to Calloway County's 23 points.
Notre Dame continued with the trend of home teams winning the team title at their own invitational (Pulaski County & Madisonville-North Hopkins). Senior Kate Williams led the Pandas to a score of 19 with her 22:39 and she had three of her teammates in tow in 3rd, 4th, and 5th. Villa Madonna placed second with 48 points.
Last but not least was the 2018 Tiger Run. Daviess County came to compete and compete they did. Led by Karlee Hoffman (senior), the ladies from Owensboro were the top Kentucky team (Floyd Central won the team title). As mentioned earlier, this team is very young. The five scorers were one senior, two sophomores (Ainsley Taylor in 9th and Emily Ann Roberts in 20th) and two freshman (Lauren Howe in 27th and Emily Rempe in 31st). The two time defending state champion duPont Manual came out with equal youth (2 freshman, 1 one sophomore, 1 junior and 1 senior) but Daviess got the best of them 76-102. A notable absence was Taylor Boggess who ran earlier in the week at the Fern Creek Relays. This class AAA team race will be an interesting one to watch all season long.
Karlee Hoffman talked about her Tiger Run championship
There were two other performances at the Tiger Run in other races that were equally impressive as some of the high school races. Haley Schoenegge of Kentucky Country Day won the girls JV race in a time of 20:24 which would have placed her 9th in the varsity race. Get this...she is an 8th grader! Oh and that is a 48 second PR and it is only the first race of the season. Add in Raelyn Willman from Assumption who ran 20:28 and she would have been 12th in the varsity race. Possible the most impressive was Josie Gilvin's freshman race win in 15:53. If she would have kept that pace for 5K instead of the 4K that she ran it would have meant a 19:52 5K and a 5th place finish for the freshman from Sacred Heart.