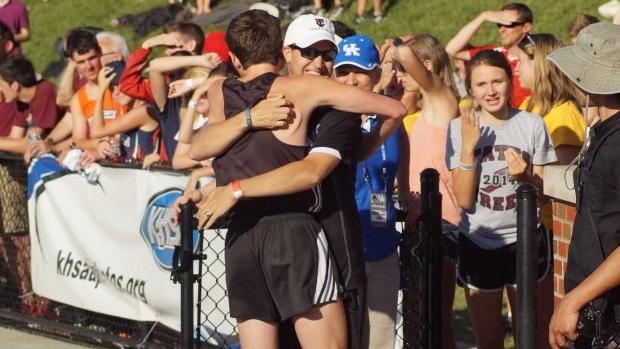 After last week's 4:02.07 at the Rod McCravy Invitational hosted by the University of Kentucky, Ben Young was hungry to break the all important 4 minute mark. Following his race (which he followed with a 1:54.98 800 meter, which was another PR), Ben said, "Wanted 3:59 but just didn't have it." How about getting to follow it up less than one week later with exactly what he was working towards?

At the Tiger Paw Invitational at Clemson, the Tates Creek High School product got his chance to go after his goal. His pace was spot on from the gun with splits to achieve the goal of 3:59. He crossed the finish line just under the four minute mark at 3:59.59. After the race, Ben said, "Feels absolutely incredible. Still barely believe it."

This accomplishment has only been achieved by two other former Kentucky high school runners. Matt Hillenbrand and Bobby Curtis (both products of St. Xavier) broke the four minute barrier with times of 3:57.00 and 3:57.20 respectively. There are three guys out there that are still active and close to the mark in Jacob Thomson (4:01.42), Yared Nuguse (4:02.44) and Kendall Muhammad (4:03.28).

Ben was the 2015 1600 meter Class AAA state champion setting the Class AAA State Meet record in 4:10.15, breaking Bobby Curtis' previous mark. Watch that state performance below and notice some of the other runners racing. Current UK teammates Brennan Fields and Matthew Thomas as well as current Notre Dame freshman Yared Nuguse are all in this state race. In fact, Nuguse flirted with 4 minutes last weekend as well running a 4:02.44. Could there be two sub-four milers in this race? Time will tell!

On a personal note (I usually try to avoid it but I cannot help myself this time), as Ben's high school coach I am beyond proud of the work that he has put into this accomplishment and his running career as a whole. He was a soccer player you all! 100% devoted to the round ball and rectangular pitch. I never once encouraged him to quit soccer as I am a firm believer in balance and multi-sport athletes (how much more research do we need to show that it is BEST for kids?). After his sophomore season, he completely committed to running (both cross country and track) and look at him now! I have been fortunate to have been one step along that path for Ben and throughly enjoy sitting on the sidelines cheering now! Congratulations buddy! You (along with every athlete I had the honor of coaching) will always be a champion in my mind not for the on track accomplishments, but for the person that you have grown to be.