It'll be a battle between Isiah Pantiere and Ryan Long all day in the sprints. Ryan Long emerged later as a serious competitor. Last year he finished 3rd in the 100 and 5th in the 200 as just a freshman and every single athlete who finished in front of him in both of those races has graduated leaving Long as the rightful heir to that throne. However, transferring from the state of Indiana, Pantiere holds the Class A state lead in the 100, 200, and 400 and he is eyeing the triple to make his name known across the state. (Note: Pantiere will compete in the long jump too)

Danville's Junior stud Gabe McKnight hasn't quite gotten to the top at state as a high schooler, but this year could be his year. He finished runner up to Walton Verona's Luke Lawson in both the 110mH and 300mH last year and now that Lawson is graduated and McKnight has another year of under his belt, he can smell that first place medal. On the boys side Keeton Thornsberry looks to go for the triple once again. Last year he won the 1600 but couldn't quite compete for that top spot in the 800 and 3200 after that finishing 5th in both of those races. If this situation plays out again like last year, 2018 800m runner up Andrew Madden will be licking his chops. He'll be on nearly fresh legs as his only other event before that is the first event of the day, the 4x800m relay.

Earlier this year at the Clash of the Classes VIII another athlete emerged as a serious competitor for a state title. Owensboro Catholic's Austin Stallings beat out Thornsberry in the 3200 while Thornsberry had just won the 800m earlier that day. Stallings did come into that race completely fresh but definitely made a . Overall, tired legs will be the deciding factor in the later races of the 800 and 3200 as a lot of these boys will be doubling and tripling throughout the day. Relays look as if they'll be an NKY show. The top times of the season come from Walton Verona in the 4x200, St. Henry District in the 4x400, and Bishop Brossart in the 4x800. Danville, however occupies that top spot for the 4x100 as they have come into late in the season running their top time at regionals. St. Henry's 4x4 will include the potent duo of Hayden Norris and Josh Gray who occupy the 2nd and 3rd spot on the Class A 400m rankings as they look to redeem themselves from a heartbreaking loss to Fort Knox last year by just .22 seconds. 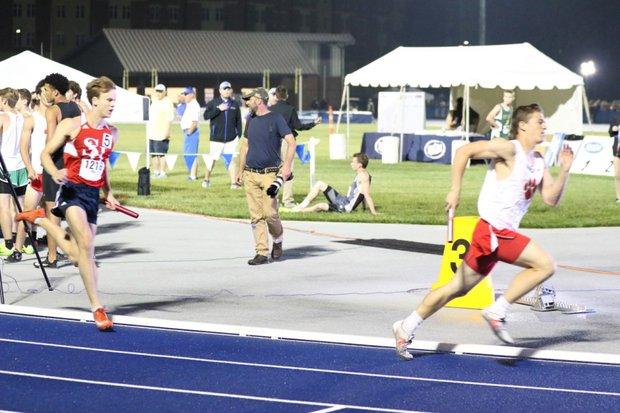 All year two boys have fought for the top in Class A in both shot and discus trading blows. On Wednesday Barrett Henley of Mayfield and Nathan Ray of Green County will battle it out head to head one last time. Henley holds the state lead in both events. He has thrown 164-10 in discus and 53-4 in shot, but coming into the state meet, Ray is the top seed in the discus with his Regional throw of 146-05 as opposed to Henley's 138-10. The biggest battle in the jumps will be in the long jump. Based on entries, there will be 4 guys right there in the conversation. Kaleb Darnell, Nolan Siegrist, Christian Biliter, and T.J. Pittman all come in very to each other. Biliter will come in as the the projected favorite with a 22-2 jump to lead Class A on the year, but don't Isiah Pantiere who will have an extremely busy day competing in multiple sprinting events as well. He comes in as the 6th seed, but his jump of 21-9.5 was good for the second best jump among Class A.

Before mentioned Siegrist of Holy Cross Louisville will be the man to watch in the TJ he proved early in March that he is capable of big time jumps, but coming into later in the season is Corey Smith and Eli Mattingly who both set their top jumps in the month of May. Those three will have their eye the podium at the state meet this year.

The Bethlehem tandem of Logan Isaacs and Nic Terrell hold the top entry marks in the pole vault with freshman Jake Davidson back in fifth. It's also worth noting that Davidson also won state last year as an 8th grader. Davidson and Isaacs both hold the top spot in Class A this year tied at 13-6 which is exactly a foot higher than Isaacs top entry mark. Both will definitely elevate their game at the state meet, the question is only by how much.