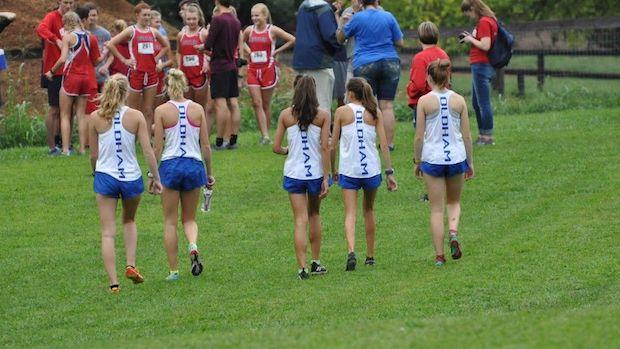 This week saw a couple teams take a breather after last weeks inaugural races. Teams like Assumption and duPont Manual did not compete this weekend.  Next weekend will be a big one for many teams as they head to one of the NINE meets across the state, including big ones like Rumble Through the Jungle, Bluegrass Invitational, and Mason County. Did I mention that we are doing something really cool at Rumble Through the Jungle coming up this weekend? If you haven't seen it, check out the article HERE! Ok, enough about what is coming up, let's recap the past weekend.

The weekend with the most top performances came from the Central Kentucky Run for the Gold. This is my meet of the weekend as it was one of the coolest cross country tracing environments that I have ever seen. The varsity races were under the lights on a nice cool summer evening. The course in incredible spectator friendly and therefore gave plenty of opportunities for the athletes to get the encouragement that they needed to throw down a good time. To add to the environment, the six teams that put on the meet did an incredible job of making this a destination meet. If you want to see what the races were like under the lights, check out the coverage video here (girls races start at the 53 second mark):

The girl's race was dominated by Tates Creek senior Jenna Strange from the gun. She went out with a mission to run a season best and she did just that. She crossed the finish line in 19:05 (the fastest time run by the KY girl this week) and it was never even close. Her time was 34 seconds faster than her time at the Tiger Run last weekend and a full minute faster than we first race last season. She may have been the front runner, but the athlete that caught my eye was Maggie Aydt of McCracken County. She dropped a full minute from last week's Warren East Raider Twilight and was 28 seconds ahead of a Joy Alexander of Madisonville-North Hopkins. Maggie was a runner I said to keep an eye on this season and has turned in two runner up finishes this season to top runners in the state (Jenna Strange and Hailey Stallings).

On the team side, Bourbon County came out and put the state on notice. Last week they took third place at their home invitational to Mason County and Cooper. This week they came out and beat class AAA top 10 teams Eastern, McCracken County, Lafayette, and Sacred Heart. The girls looked good before the race and showed it on the course. With a 2:10 split between first and fifth runner being their only weakness in this race, the Colonels of Bourbon County are quickly establishing themselves as a class AA favorite and could contend at an all classes state meet. To say I am high on Bourbon County right now would be an understatement.

The Shelby County Invitational was the Oldham County showcase. Times were not knock your socks off fast, but the team domination was evident. Oldham County won the meet with a whopping 26 points and had all five scorers in the top 10. With only one senior in the top 5 this week (Katy Chapman), this group is really showing they have the ability to be contenders the next couple years. Led by Savannah Cagle and Katy Chapman in first and second, the Colonels took home the team title.

Here is a peek into Cagle's win at the Shelby County Invitational.

Also factoring into the team race was South Oldham who had two freshman as their top marks in Kelsey King and Hannah O'Gara giving the Dragons a runner up team finish. Franklin County junior Makena Gillion led the Flyers with a 3rd place finish which gave them two in the top six finishers with Molly Stigers in sixth place. 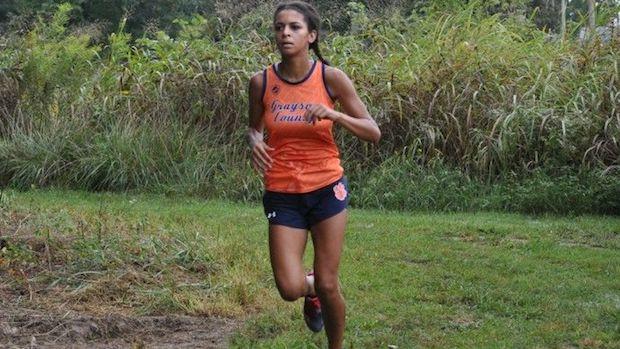 Hailey Stallings continued her winning ways by taking the Wildcat Wilderness title in 19:35 and the fourth fastest time run this weekend. This race was a no doubter as she took the title by 45 seconds. The Grayson County senior has steadily decreased her times over the first two weeks of the season and quickly making herself a name that the top class AAA runners will have to remember come November. In second was Bowling Green's Kristin Dent and Alexandra Scheithe of Owensboro Catholic in third place.

In Lexington, the Henry Clay/Tanner Duke Invitational was a chance for Somerset Christian School's senior Sydnee Meadows to get some KHSAA competition. As a member school of KCAA, she will not race against the KHSAA schools at the Horse Park in November, but her time this weekend gave her some bragging right as she took the title in 20:02 on a wet and soggy Masterson Station course. In second was a newcomer to the Lexington cross country scene with Gracie Streeval of Frederick Douglass. The senior has only one race to her name in Kentucky, but ran previously for Staley High School in Missouri. Taking third place was Tates Creek senior Carley Maskos in 21:12 and a personal best on the Masterson Station course.

The best home school runner, Ashlyn Liddle, in the state continued her tear through the Kentucky cross country with the biggest margin of victory this weekend (one minute and 41 seconds) by taking the Catbird Classic title in 19:39 while second place was Phoebe McCowan (one of the top runners in the state) in 21:02. Liddle has placed third at the Tiger Run in 19:23 and now won the Catbird Classic in 19:39 on a notably slower course. Watch for her to continue throwing down fast times and preparing for national level post-season meets.

The Grant County Invitational had the most high school performances entered into the data base and Ashlyn Vanlandingham of Conner had the top mark for a girls taking the varsity race in 19:48. After a sixth place finish last week at Tiger Run, she managed to take off 12 seconds in one week to take the Grant County title by 14 seconds over Macey Ruth of Cooper. Ruth did not leave empty handed as her team took the team title in comfortable fashion over Walton Verona 68-105. Third place went to Sophia DeLisio of Simon Kenton in 20:08.

The last meet we had in the state was the Christian County Invitational. South Warren girls cleaned up with a perfect score of 15 (other runners did not have a full team, hence why the places may not add to 15) in the team race and senior Lucy Knutson taking the win in 20:41. Her teammates were Megan Kitchens (3rd), Haylee White (6th), Anslee Crosby (8th), and Ryleigh Johnson (9th).

There was a healthy amount of out of state action for Kentucky teams this weekend. We had teams travel to three major out of state races: Brooks Memphis Twilight XC Classic (TN), St. Mary's Medical Center XC Festival (WV), and Ripley Invitational (OH). The top performances from these meets came from Daviess County as Karlee Hoffman placed 6th at Brooks in 19:12, which was the second fastest time run this weekend by a Kentucky athlete. The Daviess County girls did well as a team too with a fifth place finish against some of Tennessee's best teams.

Anna Rupp of Lexington Christian was the top girl at the St. Mary's Medical Center XC Festival hosted by Cabell Midland in West Virginia. She ran a 19:56 placing third overall in the race and eighth out of all times run by Kentucky athletes this week. Ashland Blazer also went out to West Virginia and were led by Rebekah Howard in 7th place.

Lastly, the Ripley Invitational gave Mason County another invitational title (after their Bourbon County Colonel Charge win last week) as they scored 29 points to Georgetown's 47. They were led by a 1-2-3 finish of Hayden Faris, Alyssa Bisotti, and Kylee Howe. Better yet, those girls are sophomore, freshman, freshman respectively. So watch for Mason County (oh yeah, that is ANOTHER class AA team).

Photos from the Weekend