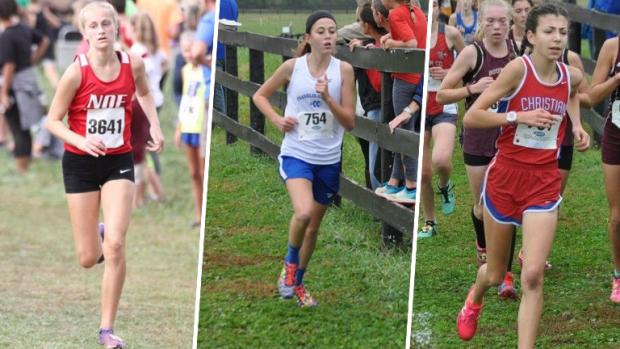 The Class of 2022 is deep with talent and they have already shown their capability early in their runner careers. The highlight may have happened last spring when Gracie Wingler of Green County captured the class A 3200m state title, but she is not alone. For some perspective, she placed 10th at the KTCCCA Meet of Champions last fall behind six other Class of 2022 members. There is some serious speed in this group and we all get to have a front row seat to their growth.

One of our all time favorite interviews was with Gracie Wingler after winning the 3200m KHSAA state championship.

Nicole Farnsley comes in with the top 5K time from last season as she placed tenth at the Foot Locker South Regional in the 13-14 girls age group. She ran her entire cross country season at the middle school level until that final race of the season. Then came the track season where she did not place lower than second in a race after April 14 (other than the Eastern Relays mile). She was the KTCCCA Middle School state champion in the 1600m and 3200m (both were personal bests). Now she joins the recent powerhouse of duPont Manual. Watch this young lady!

The quiet name on this list is Jaydee DeGraffenreid. She has been completely absent from the middle school running scene for the last two years, competing purely at the high school level. The Franklin-Simpson freshman has already run in the state cross country meet twice. Her 7th grade year she placed 43rd and then last season she came in FIFTH! This girl can flat compete. The cross country speed translated to the track as well with solid showing at the class AA region 2 meet where she placed 3rd in the 1600m and 4th in the 800m.

Christian Academy (Louisville) has another top talent to join the recent quality of Madalyn O'Dea, Clara Lynch, and Kaylee WIlson. This time her name is Addi Dewey. She was 3rd in the 1600m at the KTCCCA Middle School State Championship and 6th in the 3200m at the same meet. She has big time experience having run the state track meet once as well as the state cross country meet once. Those experiences will bode well for her as she now converts to a full high school slate.

Some other names to keep an eye on based on 4K times from last year: