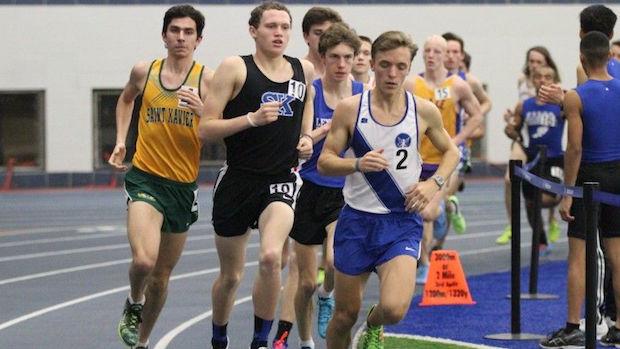 The class AAA boys distance runners is a fraternity that has been chalk full of Division I talent recently. Thinking back to the days of Bobby Curtis and Michael Eaton to Yared Nuguse, Ben Young, Brennan Fields, and the Dowdy's. This year proves to hold to form. Of the top 10, seven of them are class AAA runners led by senior Trevor Warren of Trinity and the class AAA cross country state champion Dylan Allen of Male. They will be challenged by the Kentucky Gatorade Cross Country Athlete of the Year Keeton Thornsberry of Holy Cross (Louisville) and Emerson Wells of Eastern (who also has a knack for writing on KYtrackXC). We can only hope that as we approach the state meet, that many of the names you see listed below toe the line and throw down an epic battle in the day's longest individual event. So far this year, Trevor Warren has started strong, but that was mostly in the mile. Patrick Schaefer of St. Xavier took the Wildcat Classic 2 mile title and Kyle Mastin of Simon Kenton was the top Kentucky finisher in the two mile at the UK High School Invitational. Mastin would be the athlete I would look out for to make some noise as the season progresses.

The Wildcat Classic Mile featured Warren, Allen, and Wells.
The 2018 Wildcat Classic 2 mile went to Patrick Schaefer. Could he be the force to be reckoned with in the 3200m this season?
Trevor talks to the KYtrackXC team after his Wildcat Classic one mile title