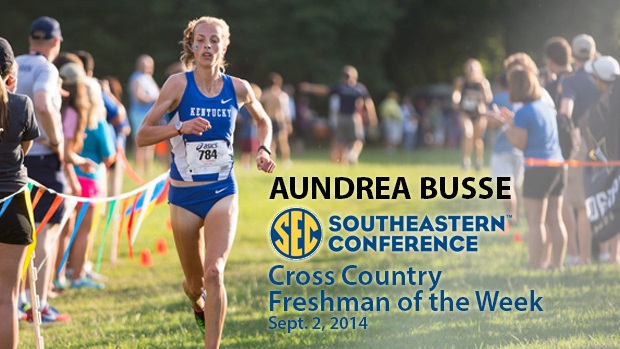 LEXINGTON, Ky. – Aundrea Busse has been named Southeastern Conference Cross Country Freshman of the Week after she won the Belmont Opener in her debut as a Kentucky Wildcat last weekend.

“I'm very proud of how Aundrea competed” UK cross country and track and field head coach Edrick Floréal said. “To race that well in her first meet in a Kentucky uniform is very exciting for her future and future of our women's program.”

Busse ran a time of 17:32.94, bettering her high school cross country 5,000-meter best to take home a win in the first meet of the season.

She has the second-best 5K time in the SEC this season behind Mississippi State’s Rhianwedd Price.

“Aundrea was very dedicated this summer with her training and it clearly showed on the course on Friday,” UK women’s cross country coach Hakon DeVries said. “I'm really pleased with her fitness and couldn't be happier that her first race went so well.”

Busse will next be in action in Kentucky’s next meet, the home Bluegrass Invitational on Sept. 13 at Masterson Station Park.