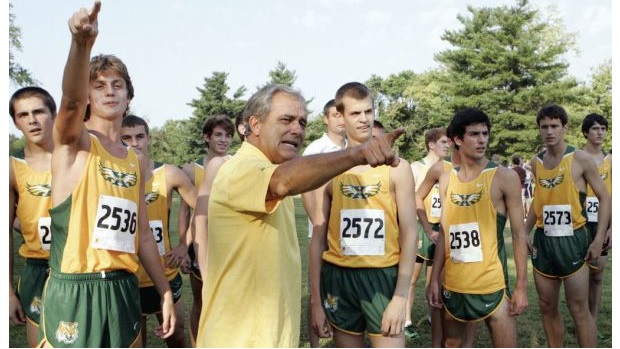 Chuck enters his 25th year as a cross country coach at Saint Xavier High School in 2014 and his 17th year leading the program as the head coach. He began his coaching career at St. X as an assistant coach in the cross country and track programs for eight years under the leadership of his friend and mentor legendary Coach Frank Cooper. When Coach Cooper retired from cross country in 1997, Chuck was promoted to the head coaching position. In the 16 seasons since, Chuck has built upon the program’s tradition of excellence and has made the Tigers a perennial championship contender. Under his guidance, the team has earned seven state titles (1999, 2001, 2005, 2009, 2011, 2012, 2013) and finished as the state runner up on three other occasions. The program has gained prominence throughout the country in recent years and has advanced as high as fifth in the national high school cross country rankings.

Talk a little about your background.  Where are you originally from and did you grow up running cross-country and track?

I’m from Louisville, grew up in the suburb of Okolona, went to St. Rita Grade School and DeSales High School, class of 1970.  Ran against those great Owensboro High School teams featuring Tony Rowe.  I didn’t know what cross country was until I went to high school.  My history teacher was the cross country coach and talked me into coming out.  I ran both cross country and track in high school, I did not run in college.  I was the 7th man on our 1969 state championship cross country team.

What is your present position?  How long have you been at your school?  Where else have you coached at?

I started in 1990 as assistant coach in both cross country and track.

Stepped down as head track coach in 2011.

I still coach distance in track and am still head cross country coach.

St. X is the only school that I’ve coached for.

I coached three state championships in track and field and seven in cross country.

Was there ever a “near miss” in cross-country or track that haunts you today?

In track the one that haunts me is the 2004 championship when we lost to North Hardin when one of my vaulters no heighted.

In Cross Country 2002 when we returned 4 runners who ran on our state championship team the year before and Daviess County beat us.

My most memorable team championship was our regional championship in 1998, my first year, when we defeated defending state champion Trinity.

My most memorable individual championship was Connor Sheryak finishing first in 2011.

Regardless of whether they won the State Championship or not, do you have an all-time favorite St. Xavier team?

My favorite team was probably my 2009 state championship team.

We lost our best runner, Jackson Carnes to sickness and our second best runner, Thomas Mann ran all season with a broken bone in his back.  We finished 10, 12, 14, 20 and 21st with a 19 second time gap.

Two years ago, St. Xavier had what many consider (including myself) to be the best cross-country team in Kentucky history?  Tell me a little about that group.  What made them so special?  Any workouts they did that were impressive enough to make you think that they were probably your best team ever?

Mark, we were very lucky. As you know this was one of the most talented teams the state has ever seen.

They were also one of the hardest working teams I’ve ever coached.

The year before, we scored 31 points and returned Connor Sheryak and Sam Lewis who finished 1, 2 along with Nick Reader 11th and Mark Johnson 12th .

We also added Max Mudd, Chris Striegel and Thomas Cave to our team.

Their goal was to qualify for Nike Cross Nationals after falling short the year before.

More than the workouts, they impressed me more by the way they raced.

They beat Carmel at the Trinity Invitational, York at Palatine and finished 2nd to number 1 ranked Christian Brothers at the Great American Cross Country Classic.

You coached one of the all-time greats in our sport in Bobby Curtis.  What individual race did he have that you’ll always remember?

In high school, his greatest individual race in my opinion was the 3200 his senior year in track, 2003.

In college his greatest race was his NCAA championship in the 5K.

How has your coaching philosophy changed over the years?

I changed my philosophy after going to several clinics where the great Joe Newton spoke.

Who are some other coaches who you look up to or admire within our sport?

In Kentucky, my high school coach at DeSales, Coach Bob Thompson who took a school with blue collar kids and made them into state champions.

Coach Frank Cooper at St. X who hired me and gave me the great honor of taking over for him after he retired.

Coach Rich Rostel from Trinity who I stole a lot of great stuff from and the Great Tony Rowe who singlehandedly raised the standards for the State of Kentucky.

Who are some people that have had a major impact on your life and career?

My parents of who gave me the opportunity to go to DeSales, my first Coach, Bob Thompson who talked me into going out for cross country, my teammates at DeSales who became my best friends and who  I still hang around with to this day.

My wife and daughters without whose support, I could not have coached.

My assistant coaches, especially Rob Young who’s been with me since I started as head coach.

What would it mean to your young men, and to you personally, to become the first Class AAA team to win four consecutive cross-country state titles this fall?

It would mean a lot to them, and they are working very hard to achieve that goal.

Whatever happens, happens, as long as they continue to work hard and do the best they can at state meet, I will be satisfied and very proud of them.

Anything else you wish to add?

I just would like to say, that I think I am one of the luckiest men on the planet to be able to coach the best sport that there is.

I’m thankful that I get to work with these kids every day.

I’m also thankful that I get to work with my coaches and all the other great coaches in the state.