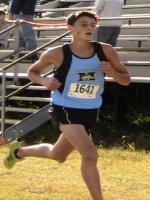 Muhlenberg County's Mustang Stampede Course Top 50 RUNN...
KYtrackXC.com will use its historical data to publish a look at the top runners from a couple of the key meets each week....

KY-IN Border Clash: O’Bryan Shatters Meet Record, IN�...
Owensboro, Ky. – Kentucky-Indiana Border Clash 2013 typified the beginning to most prep cross country seasons; both races were instigated by crushing tempos from the gun.  These blistering paces we...

Class AAA Boys Individual Preview: Chase Geary vs. A Cr...
Unlike the other two classes this year, AAA brings back its individual champion in Chase Geary of Muhlenberg County.  There is no question he is still a threat to repeat, but he faces possibility the...