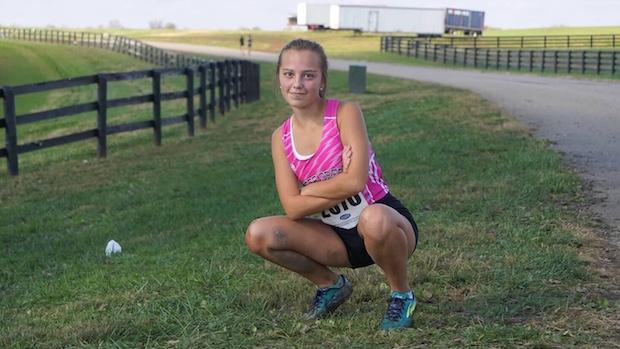 When I beat my PR my junior year of high school at Footlocker South Regional.  My PR for the longest time was from my freshman year at State.  I remember coming close to the finish and looking at that clock and seeing that I was going to be getting my new PR.  There's a picture of me as I'm coming across that finish line and I have the biggest smile on my face and that's something you don't see every day in a cross country race.

This year, our girls were supposed to be on the edge of making it to State.  Adams had told us who we need to catch and focus on in order to get that spot to State.  He had told me my competition which was a girl from Lafayette and I was okay with that.  Well when we got to Regions, I had talked to one of Lafayette's coaches and he had told me that she wasn't there.  So since she wasn't there, the next person in line for me to catch was Douglas's top girl.  I was really hoping that wouldn't happen, but it did.  We ran our race and I finished two seconds behind her.  I was very ecstatic that had happened, but now I look back and wish I would've gone just a tad bit faster.  I faced my biggest fear at that race because Adams had told me that I may have had to focus on her at Regions and she was running much faster than I was.  I'm very proud of myself.

Out of all your high school accomplishments which stands out the most and why?

It would have to be this year (senior year) because I put in a lot of work into this season and I got a good outcome.  I was consistent this whole season and not once ran an awful race-at least in my eyes.  I was injured for the middle of my season, but I was still able to run at my meets; it was difficult to run at practice because I wanted to be in "ship-shape" for the meets.  My times were still pretty consistent with the injury.  From getting third at one of my races to placing sixth in my region, it was a very good way to end my high school career.

After attending all the summer practices this year, I wish I would've ran every summer.  From the outcome I had this season, I think to myself how much faster I could've been past seasons and this season.  Who knows, maybe I could've had much faster times. 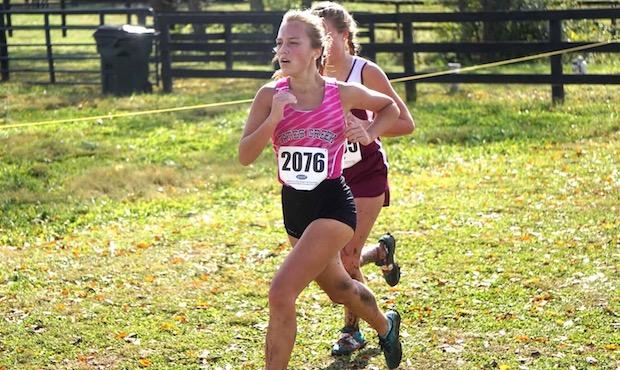 Injuries definitely were a big obstacle for me.  My sophomore year I had a hip injury and that caused me to sit out for two of our meets.  This year, I had a knee/IT band injury and that affected me a lot towards somewhat the middle of the season.  I wasn't able to run most of my practices because it would flare up so bad to where I couldn't even move.  Most of my practices consisted of the stationary bike or strengthening exercises.  Yes, it was awful, but once the pain started going away, my coaches got me back into routine.  I think all the time to myself that if I wasn't injured, that I probably could've ran faster and reached that PR instead of being consistent and running about the same times every meet.

I will for sure miss running with my teammates and the many fun times we've had with one another.  I won't miss Miss Jenna Strange's corny jokes though!

Don't be like me and look back and think about all the "if's" and just focus on you and what you've accomplished.  It's very hard for me to overcome that, but many others can do that and I encourage them to.  Also, what you put in, is what you'll get out: remember that.

I want to major in exercise science and I still am currently weighing my options on what school to attend.

Chris Hawboldt for basically telling me that I was going to run high school cross country.  When I was in eighth grade, I told my middle school coach I didn't want to run in high school.  Well, at the Lexington School meet Mr. Hawboldt showed up and introduced himself to me and told me I was running.  Then when he told me, he was encouraging me to run, but now as I look back at it, he told me I was.  He was a great coach to me and I love his attitude and just him himself.  I do miss the "encouraging phrases" he'd yell at me as I ran in my meets.  I do wish he would've coached till the end of my high school career, but now he's got it much better and he's the reason why this senior send-off is a thing.  Hawboldt, you'll always be my favorite!

Charlie Adams for being an amazing coach my past two years.  He's been there for me and is one of the only people that actually believes in me and my running abilities.  He was also there for me throughout my injury that occurred this year.  If it wasn't for him and his training, I wouldn't have been able to be where I am now.  I will for sure miss his "qwerkiness" and his many attempts at trying to turn everyday life into a math problem.

Joshua Price for coming up with my nickname "Carley Consistency" and the many inspirational talks.  Even though he coached me for one year, I'm glad it was my last year and that it was him.  Throughout my injury, he'd be there to support me and help me get through it.  He also set very expectations for me-which I didn't like- because he believed in me as well.  I am looking forward to track season with him!