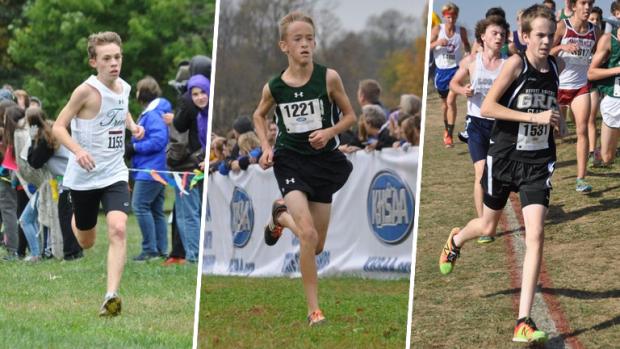 Freshman year has passed and the newness of running for the high school team is old hat. Sophomore year is upon us and it is time to begin that work to be an upperclassman on your team. These gentlemen have already made some noise on the state scene and now look to help their teams to region and state titles.

Trinity's Ryan O'Dea was 36th at the state cross country meet last year and was the Shamrocks' 6th runner in a team region championship effort. However, with the graduation of Trevor Warren and Jacob Burnam, the door is now open for Ryan to be a consistent top 5 runner for the Rocks. Led by Jack Baum and Shane Williams, O'Dea will be an important part of the effort to dethrone the St. Xavier Tigers as the repeat state champions.

Griffin Staude of Western Hills was under the radar all year last year. He was 8th at the class AA state meet after finishing 5th in his own regional meet. His regional meet finish was due to Lexington Catholic (the eventual state championship team) taking the first four places in Region 4. Griffin was steady all season with his worst time being a 17:38.00 and his best time at 16:29.03. On cross country standards with varying course difficulties, that is solid season for a freshman harrier. Watch for Griffin to be an athlete that will be in the overall picture of class AA and maybe in the state.

George Rogers Clark is on the rise and that is in large part due to the youth of their team. Their regional and state team last year was made up of two 8th graders, three freshman, a sophomore and a junior (the latter two were their 6 and 7 runners). The leader of this youth movement in Winchester is Cord Tackett. Now in his sophomore season, Cord will look to improve on his 57th place finish at the state meet. I would be remiss to not mention the work that head coach Dodd Dixon is doing with the team. He is coaching all levels of athletes and providing incredible coverage of our sport across the entire state. Anytime you see work from StridersHigh, know that it was the hard work of Dodd and his crew!

Last track season, Cord Tackett started strong with a runner up finish in the 1600m at the Woodford County Luck O' Irish