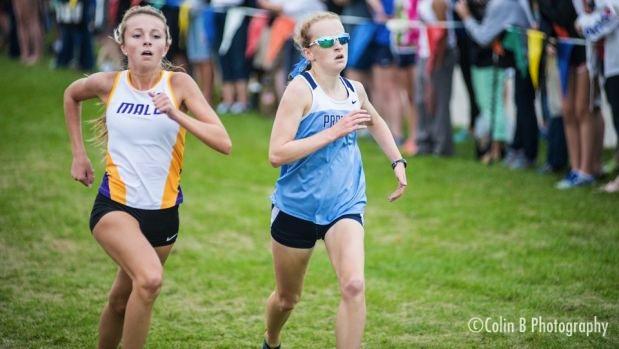 CHICAGO (January 29, 2018) - In its 33rd year of honoring the nation's best high school athletes, The Gatorade Company, today announced Kaitlyn Lacy of Louisville Male High School as its 2017-18 Gatorade Kentucky Girls Cross Country Runner of the Year. Lacy is the first Gatorade Kentucky Girls Cross Country Runner of the Year to be chosen from Louisville Male High School.
The award, which recognizes not only outstanding athletic excellence, but also high standards of academic achievement and exemplary character demonstrated on and off the racecourse, distinguishes Lacy as Kentucky's best high school girls cross country runner. Now a finalist for the prestigious Gatorade National Girls Cross Country Runner of the Year award to be announced in January, Lacy joins an elite alumni association of past state award-winners in 12 sports, including Lukas Verzbicas (2010-11, 2009- 10 Carl Sandburg, Orland Park, Ill.), Megan Goethals (2009-10, Rochester, Rochester Hills, Mich.), Jordan Hasay (2008-09, Mission College Prep., San Luis Obispo, Calif.) and Chris Derrick (2007-08, Neuqua Valley, Naperville, Ill.).
The 5-foot-4 senior won the Class AAA state meet this past season with a time of 18:03.09, breaking the tape 21.27 seconds ahead of her next-closest competitor and leading the Bulldogs to a 10th-place finish as a team. Lacy took third at the Nike Cross Nationals Southeast Regional championships and then finished 83rd at the NXN Final. A five-time First Team All-State selection, she holds nine school records and was the 2017 Kentucky Track and Cross Country Coaches Association's Class AAA Cross Country Athlete of the Year.
A member of Male High's Photography Club, Lacy has volunteered locally with the Salvation Army and has donated her time to community beautification projects. "Kaitlyn was battling injuries throughout the first part of the season," said Kirk Thomas, head coach of Oldham County High. "At state, she ran away with the race and we got to see her running to her potential."
Lacy has maintained a weighted 3.82 GPA in the classroom. She has signed a National Letter of Intent to run cross country on scholarship at the University of Kentucky this fall.
The Gatorade Player of the Year program annually recognizes one winner in the District of Columbia and each of the 50 states that sanction high school football, girls volleyball, boys and girls cross country, boys and girls basketball, boys and girls soccer, baseball, softball, and boys and girls track & field, and awards one National Player of the Year in each sport. The selection process is administered by the Gatorade Player of the Year Selection Committee, which work with top sport-specific experts and a media advisory board of accomplished, veteran prep sports journalists to determine the state winners in each sport.
Lacy joins Gatorade Kentucky Girls Cross Country Runners of the Year Michaela Reinhart (2016-17 & 2015-16, Lexington Catholic High School), Gabriella Karas (2014-15, Martha Layne Collins High School), Whitney O'Bryan (2013-14, Daviess County High School), Bailey Davis (2012-13, Assumption High School), Cassidy Hale (2011-12, duPont Manual High School), Emma Brink (2010-11, 2009-10 & 2007-08, Sacred Heart Academy), and Kaitlin Snapp (2008-09, Danville High School) as athletes who have won the cross country award since its inception in 2007.
As a Gatorade Player of the Year, Lacy will be able to select a national or local youth sports organization to receive a grant as part of the Gatorade Play It Forward program. Every Gatorade Player of the Year state winner receives a $1,000 grant to donate and will have the opportunity to enter for an additional $10,000 spotlight grant by writing a brief essay explaining why their selected organization deserves additional support. 12 spotlight grants - one for each sport - will be announced throughout the year.
To keep up to date on the latest happenings, become a fan of Gatorade Player of the Year on Facebook and follow the conversation on Twitter #GatoradePOY. For more on the Gatorade Player of the Year program, including nomination information, a complete list of past winners and the announcement of the Gatorade National Player of the Year, visit http://playeroftheyear.gatorade.com/.