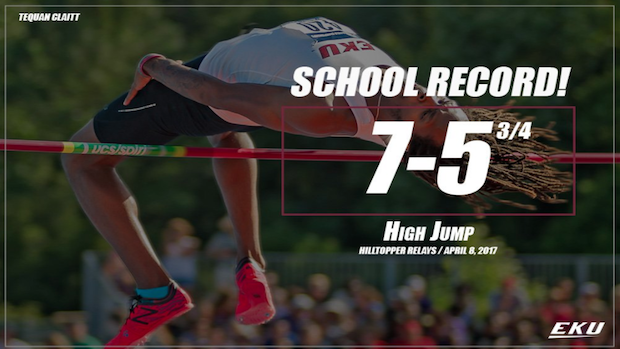 The predicted top-eight individuals in each event receive preseason All-America honors from Flotrack. Claitt checks in at No. 6 on the men's high jump list, just behind the likes of NCAA champions Trey Culver (Texas Tech), Christoff Bryan (Florida State) and Randall Cunningham (USC).

Claitt established himself as one of the top high jumpers in the country last season when he shattered EKU's 35-year old school record in the event with a leap of 7'5.75" at the Hilltopper Relays on April 7. That was the top jump by any NCAA Division-I athlete last season. It was also the sixth-best jump by an American, at any level, in 2017.

Claitt - a three-time OVC champion out of Bryan Station High School in Lexington - will look to advance to the NCAA Indoor Championships this winter, which are held March 9-10 in College Station, Texas.

A majority of the EKU track and field team opens the indoor season the weekend of January 12-13 at the Kentucky Invitational in Lexington.