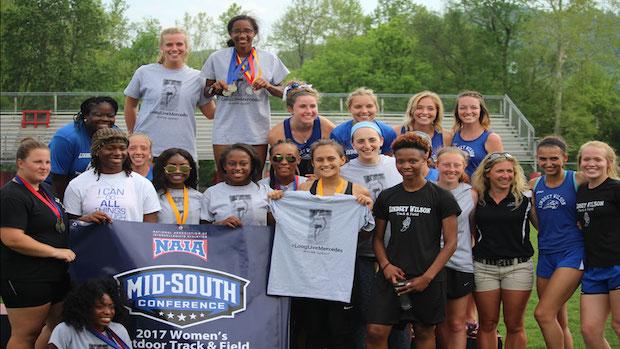 After the conclusion of competition, Alexia DeHaven-Boyd was named the MSC Athlete of the Year after accumulating the most points of any female athlete at the championships. DeHaven-Boyd won three total events, adding a second and fourth-place finish at the conference meet.

Paige Pettell was named the MSC Freshman of the Year. She won two events, finished runner-up in one event and seventh in another throughout the weekend.

Lindsey Wilson head coach Jamaine Gordon was voted MSC Coach of the Year by his peers. It is his second honor on the women's side after also earning the honor in 2014. He has led the Lindsey Wilson women's program to conference titles in three of the last four seasons.

Annesha Harris, DeHaven-Boyd, VaShawnda Smith and Tatiana Williams won the 4x100 meter relay with a time of 49.48 seconds. The LWC quartet edged out second place by 0.22 seconds to start the day.

Oreatha Hurt was the final Blue Raider to win a running individual title, taking home the top spot in the 100 meter hurdles with a time of 15.46.

In the women's field events, Chanel Roberts won two events while Pettell won one event and finished second in another on the day.

Roberts' wins came in the shot put and high jump. She dominated the field in the shot put to win her fourth career MSC title in the event, winning it every season since her freshman year. She reached the A standard mark in the shot put as well. The senior then won the high jump event after beating out Cumberlands' Madison Peace in a jump off. The duo were the lone competitors to clear 1.56 meters, but unable to successfully clear a higher mark. It then went to a jump off, where Roberts cleared 1.56 meters on her second attempt and Peace failed to do so.

Pettell finished second behind Roberts in the shot put with a toss of 12.77 meters, but won the discus throw with a distance of 40.42 meters.

The Blue Raiders are back in action for the Lindsey Wilson College Twilight on May 12 before the NAIA National Championships begin on May 25. 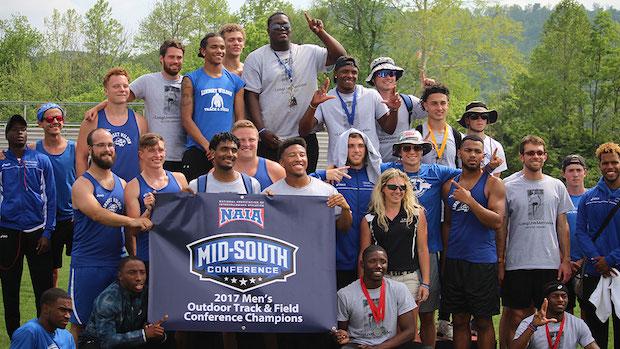 The Blue Raiders racked up 211.50 total team points to edge out second place Campbellsville (Ky.), who scored 200 points. It marks the third-consecutive MSC Outdoor title for the men's program, which also captured the 2017 MSC Indoor Championship.

After the conclusion of the competition, DeQuan Robinson was named Co-Athlete of the Year along with Campbellsville's (Ky.) Brayden Russell after the duo tied for the most total points at the conference meet.

Robinson won two events and finished second in another at the championships and was also named the Freshman of the Year.

Lindsey Wilson head coach Jamaine Gordon was voted 2017 Coach of the Year by his peers. It marks the second-straight season Gordon has earned the honor on the men's side.

Lindsey Wilson trailed the first place team by 66 points after 15 of the 23 events had been completed, but a strong push from the sprinters and field events near the end of the day helped the Blue Raiders bring home the title.

Four individual titles were captured by the Blue Raiders on Saturday, one each by K'Lan Harris and Goabaone Mosheleketi and two by Robinson. Six runner-up finishes were collected by LWC athletes. Each competitor earned First Team all-conference honors while the runner-ups earned Second Team All-MSC.

Harris won the 400 meter dash when he edged out Robinson. Harris crossed the tape in 49.17 seconds, followed closely by Robinson at 49.52.

Robinson grabbed his first win of the day in the 200 meters when he narrowly beat out teammate Kevin Hallmon for the win. Robinson sprinted his way to a 21.19 finish, while Hallmon finished at 21.20 in second place. Both times were good enough for national A standards.

The duo of Robinson and Hallmon also went one-two in the 100 meter dash finals. In another close race, Robinson won this time by .02 seconds after clocking in at 11.27, and Hallmon finished at 11.29.

Mosheleketi was the final Blue Raider to win an event, taking home the victory in the triple jump on Saturday with a leap of 15.64 meters, meeting the national A standard mark. Teammate Anthony Thompson finished in second in the event with a leap of 14.38 meters, missing the A cut mark by .02 meters, but still hitting a B standard.

Cameron Murphy and Caleb Watson both added runner-up finishes on the day. Murphy took second in the 400 meter hurdles with a B standard time of 54.13, while Watson place second in the 800 meter run at 1:56.41.

The Blue Raiders are back in action for the Lindsey Wilson College Twilight on May 12 before the NAIA National Championships begin on May 25.