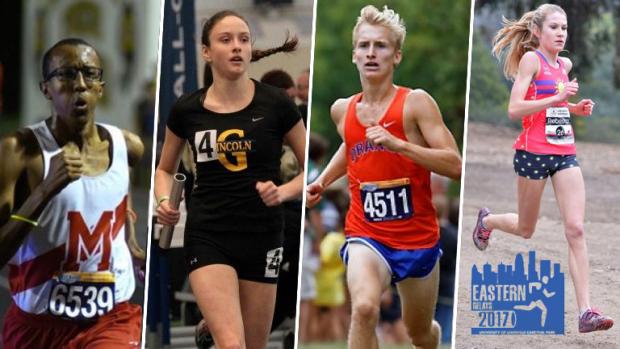 Every year, the Eastern Relays attracts top talent from around the Midwest and Southeast. Every year, top times are consistently run in the distance events with the 3200m run often serving as the highlight of the distance races.

This year should be no different.  On the girl's side, the 3200m run figures to be an exciting one. The top seed is Rebecca Story of Christian Academy of Knoxville. Story, Foot Locker XC 3rd placer last fall, comes in with a personal record of 9:59.85 and looks to better that while being pushed by Michaela Reinhart of Lexington Catholic (KY). Reinhart recently placed 5th at the prestigious Arcadia Invitational running a 10:17.71, which is good for 6th in the nation and top time ever by a Kentuckian. The girls will look to break the meet record of 10:34.61, set last year, and potentially best the current national leading mark of 9:57.52.

For the boy's, the 3200m run hopes to draw the same excitement as last year, where the meet posted the top two times in the nation. The top seed is Hunter Moore of Olentangy Orange (OH) who comes in with a time of 8:59.78. Seeded behind him is Dustin Horter, one of the best juniors in the nation, with a time of 9:02.79. The boys will look to best last year's meet record of 8:46.72 set by Andrew Jordan. The boy's race figures to be an exciting one with 20 boys coming in with a time below 9:30.

For the one mile run, on the girl's side it figures to once again be a duel between Story and Reinhart who come in with times of 4:50 and 4:53.86 respectively. They will look to set a new meet record by running faster than 4:49.28 and potentially set a new national leading time if they can break the 4:47 barrier. For the boys, Yared Nuguse of duPont Manual (KY) leads the way with a time of 4:12.10 and is followed by a fellow Kentuckian Austin Matthews of Paul Dunbar who has a time of 4:16.19. The boys will have the tall task of trying to break Brock Baker's record of 4:06.77 set in 2013.

The girl's 800m race figures to be an interesting one as Gahanna Lincoln (IL) comes in with three of the top five times and is led by Madison Martinez who has a time of 2:10.52. It will be interesting to see the tactics the ladies use throughout the race to possibly break the meet record of 2:12.94 and to set a new national leading time. The boy's 800m run is a deep race with 20 coming in with a time below two minutes. The race will feature Mikah Bailey of Paul Dunbar (KY) who comes in with the fastest time of 1:53.20. The boy's will look to best the current nation leading time of 1:50.26 and possibly break Tretez Kinnaird's meet record of 1:49.97.

Up next is an event unfamiliar to many, the 2000m Steeplechase. On the girl's side Clara Lynch of Christian Academy of Louisville leads the way followed by Taylor Ewert of Beavercreek (OH). On the boy's side, Ben Ewert, steeplechase All-American of Beavercreek (OH) returns to defend his crown and possibly break his own meet record of 6:07.32, set last year.

Full entries are posted at http://easternrelays.milesplit.com under the live results link (green button) at the top of the page.