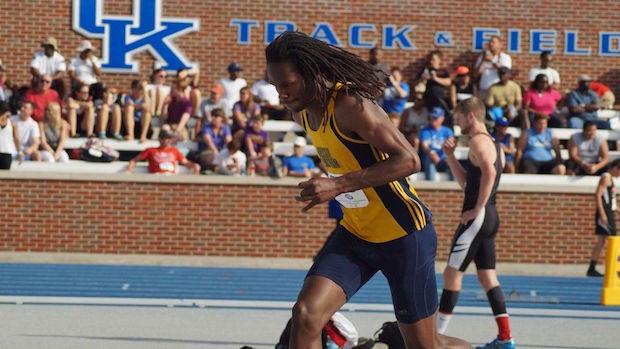 Eastern Kentucky University sophomore Tequan Claitt recorded the No. 1 high jump in the NCAA on Saturday at WKU's Hilltopper Relays, shattering a 35-year old school record with a leap of 7-5.75 (2.28 meters).

The previous school record was 7-5, set by Ken Glover in 1982. Glover was the NCAA runner-up in the high jump that year.

Claitt -- a graduate of Bryan Station High School in Lexington -- was the 2016 OVC indoor and outdoor high jump champion. He took silver at the 2017 OVC Indoor Championships in February with a then-personal best mark of 7-1.75.

Two other Colonels also won events at the Charles M. Rueter Track and Field Complex over the weekend. Junior Tom Koringo took first in the men's 800 meters with a time of 1:52.9 (No. 6 in the OVC). Sophomore Erick Rotich, meanwhile, won the men's 3,000 meters in 8:39.11.

Other notable performances from the weekend included junior Darrian Botts finishing fourth in the women's triple jump with a leap of 38-0.75 (No. 11 in the OVC) and freshman Ke'Asia Johnson-Bell placing eighth in the women's 100-meter hurdles with a 14.33 (No. 7 in the OVC).

EKU returns to action next Friday at the Centre Twilight in Danville.

Tequan Claitt from the 2014 Lafayette High School All Comers meet.