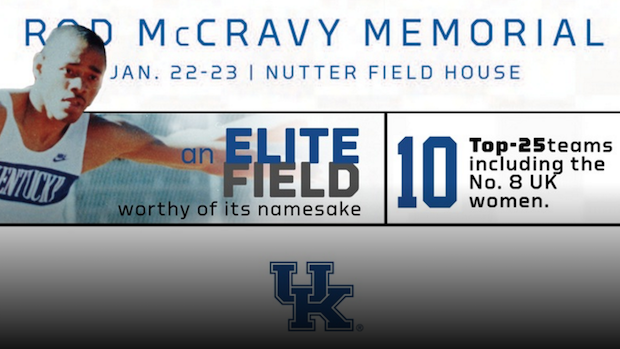 LEXINGTON, Ky. - Some of the world's best track and field athletes - a lot of them, really - showed strong form to begin what they hope will be a defining season, this weekend at Kentucky's Rod McCravy Memorial Meet.


When all was said and done on Saturday, the McCravy produced six world-leading times at the time of publication. Sure, the meet produced nine world leaders last year, but seven is a ton for one track meet.

Perhaps the McCravy's status as a bona fide super meet, at least as early-season competitions are concerned, is now without doubt.

Consider the amount of NCAA-leading times recorded: six, and NCAA top-5 times/marks (26) that came this weekend inside Nutter Field House.

The McCravy has welcomed plenty of greats over the past three years. World-class performances recorded this weekend were plenty.

Kendra Harrison began Saturday's track events with a shockingly fast opener to her first full season as a professional. Maybe Harrison and her coach, Edrick Floréal, weren't quite shocked, but surely they must be feeling good about her start to the year.

In any event, her preliminary 60-meter hurdles time of 7.86, which she followed with a 7.83 to obliterate a field of collegians in the final was impressive especially when put in context.

Harrison's prior personal best was 7.87, which she recorded to win a historically fast NCAA Championship Final last March.

The two times she ran on Saturday rank Nos. 1 and 2 in the world this young year.

Trayvonn Bromell. a recently-turned pro World Championships medalist who trains at Baylor, ran the world leading 60m time - 6.54, and he said he got off to a bad start afterward. He beat NCAA leader Cameron Burrell (Houston),  and Rondell Sorrillo - a former NCAA 200m Champion at UK now running under Floreal's guidance for Nike -- in that race.

Kentucky's Sha'Keela Saunders, the long jump world-leader entering the meet recorded the third best jump by anyone in the world this year, too on Friday.

Yup, the McCravy delivered on the promise of its stacked field, again.

Kentucky notables
Saunders' classy performance and happy-go-lucky attitude about it might not have come as a surprise, She's been winning NCAA medals for years now.

Perhaps the most pleasantly surprising performance as it relates to the eighth-ranked Kentucky Wildcats was turned in by Ariah Graham.

Converted to a half-miler last May, Graham's 2016 debut was a nearly a three-second PR.

She ran 2:04.64, the No. 3 time in the NCAA this year, by outkicking Florida's All-American Claudia Francis for the win. The time also shattered the indoor school record.

Tim Duckworth completed the best heptathlon of his young career, scoring 5695, the second best score in the nation this year.

Sophomore Jackie Howell and freshman Jasmine Quinn ran 8.29 in their 60m hurdles prelims, but were less successful in the final.