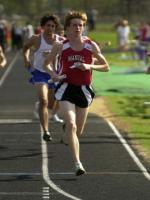 10 Years of the Boys 800m Run - Top 100 Times of the KY...
These are the Top 100 Performances in the last 10 years in the Boys 800m Run. 2013 Butler Grad Tretez Kinnaird shows up a whopping 23 Times out of 100 including the Top 9....
Interview with duPont Manual\'s Jon Erickson...
Jon is a senior at duPont Manual and will be running for Vassar College next year.  He is one of the top contenders in the Class AAA 800m Run and will be running in the 3200 relay....
KYtrackXC.com April 10th Athletes of the Week...
On Tuesday of each week, KYtrackXC.com will release the Male and Female “Athlete of the Week” Awardees.  This award is based on primarily performances from the past week.  Keep in mind, this mea...
KYtrackXC.com Boys All-Indoor Team...
The following have been chosen to the KYtrackXC.com All-Indoor Team based on their performances during the indoor season. (Pictured: Lewis Dodson part of the Male 4 x 400 Relay) (Photo: Don Goodwin)�...