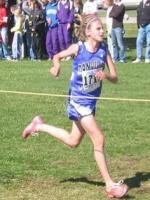 Play
Interview with Kaitlin Snapp, winner of the Class A Womens 1600m

2012 XC: Interview with Sayre's Maddox Patterson...
Maddox Patterson is the three-time defending Class A State Champion from Sayre.  This past spring she added a Class A 3200m State title to her resume as well as trying out the 2000m Steeplechase for ...

Dream Mile: Thomson & Receveur Win!...
The 3rd Annual Dream Mile will be held Friday night at St. Xavier High School in Louisville.  This still young event has quickly grown into the best mile/1600m race in the state annually with much sp...