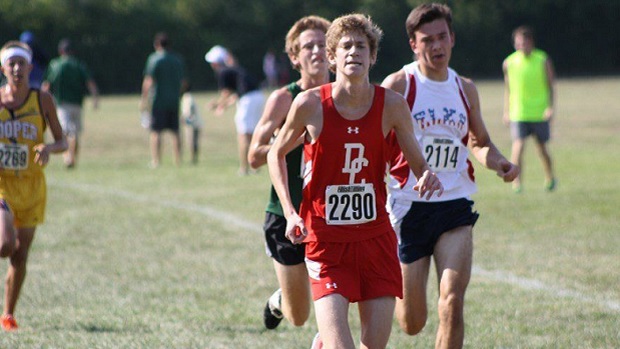 What was your most memorable meet or race?

My most memorable race is State Meet in track my senior year. I had always dreamed of winning a state championship ever since I started running in fourth grade. I don’t think the day could have been any more perfect the weather was nice, competition was high, and everyone wanted the same thing which was to win. I think the coolest part of the race wasn’t just finally getting a state championship but how great of a race it was. Had to be the most fun I have ever had racing against all those great runners.  Crossing the finish line was a special moment and I will remember that forever.

Out of all your high school accomplishments, which stands out the most?

I would say winning state in the 2 mile but I would also say breaking the Daviess County school record for the 2 mile. It was something my coach and I had talked about for years and trained for every day to try to accomplish and when it finally happened it was a special moment for him and myself.

If you could do it all over again, is there anything you would change?

I wouldn’t change anything. I think everything that has happened, good or bad, was all worth it. You learn from mistakes and you find ways to better yourself through those mistakes. Running is a challenging sport that some days you just don’t “feel” like doing it but you do it anyway because that’s your life. Any choices I have made or any extra miles I have put in were all worth it because looking back if I had changed anything I may not be in the position I am in today and for that I am very blessed.

The most difficult obstacle I had to overcome was senior year during cross country season. All last summer I trained hard and was motivated and the season even started off with me running some decent times but I felt I was in better shape than I was showing. Towards the middle of the season during the early month of October I had been running some below average times and not competing well in a few races. Every single workout or race I would feel extremely tired and didn’t have the desire I once had to compete. After a home meet Coach Rowe told me to go get my ferritin and iron levels checked. I didn’t think much of it really but I went to the hospital and got them checked out. That night I found out my ferritin level was an 8 which was considered extremely low. On average we were told that 25 was considered very low and still not a good level. Ferritin could range all the way up to levels around 300. After I found that out it did explain why I had been so tired and non-competitive over the previous weeks.  I immediately began to drink spinach smoothies, eat red meats, and do anything to try to increase my performance and get back to the way I was prior to this problem. It was a tough few months trying to overcome the tiredness and weakness but luckily I was still able to compete and run. If anything I think it showed me and others around me how important it was to stay eating healthy and focused on what is important.

I will miss my team the most and my coaches. It seems like the last four years have happened so fast but it was a good ride. I have learned so much about this sport during my high schools years. Every day I learned something new from a coach or a teammate. I will miss wearing that DC on my chest every Saturday this fall and on the track in the spring.

Stay positive in everything you do. Always do your best when it comes to a sport and try to achieve something every time you do it. But competing is only part of it. You cannot forget to have fun while doing it. If you’re a runner don’t give in just because of a little bit of pain because you’ll regret it if you do.  And always finish the race. One second of losing concentration on the goal can be the difference in getting a PR. Just always give 110% on the course, on the track, in class, and in everyday life.

What are your College/Career Plans?

I will be attending the University of Louisville in the fall and will be running Cross Country & Track for them as well. I have so many different things I would like to do with my life but I am not completely sure on what that’s going to be. I would like to coach because running has been in my life for as long as I can remember and I wouldn’t mind continuing to do it. But I have a few years to figure that out.

My parents for all of the support they have given me and the team over the last four years. Taking me to meets across the country for me to run for 15 minutes means the world to me. I have to thank my coaches for all the work they do and my teammates for always supporting each other. I also would like to thank God because without him we are nothing. Also, a big thanks to KyTrack for all the coverage that you all do it doesn’t go unnoticed. And thanks to Jonathan Grooms for all his work and to Tyler Karnes for all you do as well. You guys are great!

And to Daviess County for allowing me to be a part of such a dynasty program over the last four years. It has been a great ride. Always a panther.